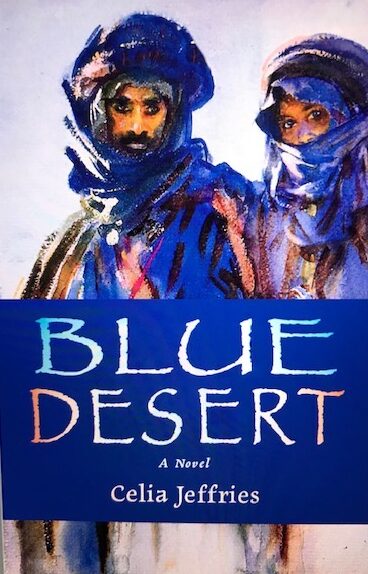 Blue Desert is the story of Alice George, a headstrong young British woman, and her life among the Tuareg, a tribe of nomadic warriors. While the outside world faced the catastrophe of World War I, the Tuareg continued to crisscross the Sahara as they always had. A matrilineal society in which the men are veiled and the women hold property—a world in which anything can happen—it was a world well suited to eighteen-year-old Alice, who discovers a life she could never live in corseted England.

In 1917, Alice returns home to a world completely alien to the one she had left seven years before. Her silence about her life in the Sahara is finally broken five decades later when she receives a telegram announcing Abu has died in the desert. “Who is Abu?” her husband asks. “My lover,” she replies. Thus begins a weeklong journey of revelation as Alice lays bare her secrets.

Celia Jeffries’s work has appeared in numerous newspapers and literary magazines including Westview, Solstice Literary Magazine, and Puerto del Sol, as well as the anthology Beyond the Yellow Wallpaper. She has received grants from Turkey Land Cove Foundation, The Massachusetts Cultural Council, and La Muse. Jeffries holds an MA from Brandeis and worked in news and educational publishing before earning an MFA from Lesley University in fiction and creative nonfiction. She has worked with writers at all levels, from elementary school to university both here and abroad, and in many different communities, including incarcerated, literacy, and ESL programs. Her own writing has been nurtured in the community of writers in Western Massachusetts, where she is on the steering committee of Straw Dog Writers Guild, and where she offers workshops at Pioneer Valley Writers Workshop.