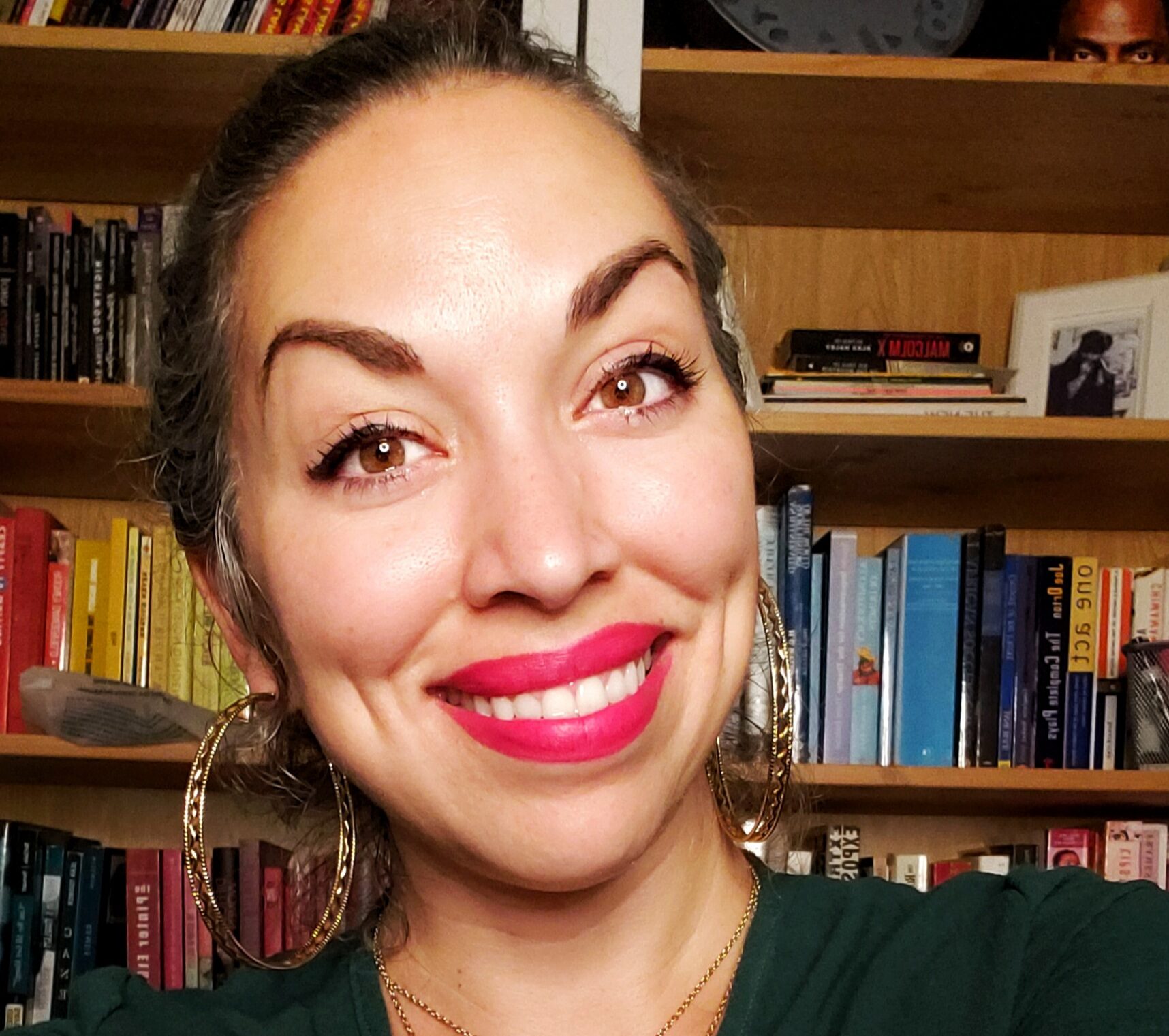 Rhiannon Ciara Vaughn is an award-winning Chicana playwright based in Los Angeles. Her short play “Wine Night” was a Region 8 finalist at the Kennedy Center American College Theater Festival. Her play “A Lovely Day Outside” was selected as a Top 5 Play at the 2019 Living on the Edge Festival. Her play Gifted* was a finalist for the 2019 Kennedy Center/NNPN MFA Workshop. Rhiannon’s plays can be found on New Play Exchange. Rhiannon has written, directed, produced, and edited short films that have screened at SF Sketchfest, Sitges Film Festival, Telluride Horror, Awareness Festival, and the 909 Film Festival, where her short comedy 9oh9 received the Ambassador Award. Rhiannon has produced live comedy including Underbelly, Good Heroine, and at Riot LA Comedy Festival. In 2013 her variety show THEME PARTY PRESENTS: BLUTHFEST! was featured in LA Weekly.

What drove you to Stage and Screen, a medium in which your words are often conveyed through the performances of other people, as opposed to prose or poetry? Are there aspects of it you find simply would fall short if only expressed through the written word?

I was drawn to Stage and Screen because of the collaborative nature of the art. It could be because I was an athlete or that I just love being bossy. Either way, teamwork makes the dream work. I do have to write by myself sometimes (yay for writing partners), but the play or show does not truly come to life without collaboration and my work is all the richer for it.

Stage and Screen is this space where a group of different people in all their unique perspectives come together with a common goal to bring the same vision to life, each contributing their own relationships with the themes and material. Since we avoid writing out the minutiae, a director or actor will come in and create their own inner monologues within the story I’ve written. It’s like alchemy. I start with something very personal to me and they make it something very personal to them. We often have different reasons motivating the same behavior in service of the same themes/questions, so magically the story takes on a life of its own, becoming something more meaningful and multidimensional than when I started.

Because of all that, there’s always space for surprise when someone makes a choice I wouldn’t have considered before. I love that. It’s like I get to be an audience to the work all over again.

What is it you love writing about the most? Do you find yourself returning to the same themes, or similar types of plays?

I love writing about identity especially when at a crossroads. Identity has been a big question in my own life because I have always straddled many. I’m sure the fact that I have been asked “What are you? Where are you from?” no less than 500 times has been a great catalyst for asking that question myself.

In this season of my life I’m writing a lot about the identity of Mother, exploring the chasm between Who I Am Now and Who I Was Before and the ways I’m influenced by the social pressure of who a Mother should be.

The experience of giving birth and breastfeeding shattered my reality. Before motherhood I was a fiercely independent adventurer who was very comfortable in my identity as an individual. Then I gave birth and suddenly I became an integral part of a delicate ecosystem. I literally cannot do things without considering the impact it would have – my brain has been rewired.

I also love thinking about the relationship between I AM vs the COLLECTIVE and the ways they influence each other. I write a lot about assimilation and all its demands. My interest is heavily influenced by my experience as a Chicana who doesn’t speak Spanish even though I was raised in a Spanish-speaking home. I love writing about women who are breaking free from the pressures of assimilation after realizing they’ve been caught up in its oppressive bondage in the first place. Denying parts of oneself is a heavy burden.

I often pull from my very specific and personal experience, allowing all the sides of me to rub up against each other with their hopes and dreams and logic and doubts and ignorance.

I have been able to play across many different platforms in my writing, so it’s been fun thinking about our relationship with identity in a film vs TV vs a play vs a podcast. Each form lets you explore from a different angle. I am currently working on a dark, surreal fictional podcast about a mother who loses her child in a store and how her identity of Good Mom is wiped out in an instant. I’m also working on a play about a Gabby Bernstein-type Guru whose past threatens the healing empire she’s built when the daughter she abandoned a decade earlier in pursuit of enlightenment returns. Both are mothers who are asking “Who am I if I can’t ______?”

I’m often inspired by people who can take things and break them apart into their simplest pieces so I can see the world and these experiences from a different lens. I love theatre of the absurd for this reason. My all time favorite movies–the ones that made me want to make movies–are Teen Witch, Miss Congeniality, and Children of Men. All center a woman coming into some kind of power (sometimes with the help of a makeover) and how accepting their complexity and what makes them “different” changes their entire world. They are mythology. They have deep messages of cooperation and acceptance. AND THEY ARE SO FUN. Even Children of Men is funny in parts. I still watch them all the time to remember what I love about life and movies.

The biggest thing that gets in the way of my writing at the moment is life. I’m in a very specific season with two toddlers so life happens fast and loud and messy. I don’t have a lot of uninterrupted space to drop into another world. It’s just a reality of the moment, but I try to connect with the fact that living life now will be fruitful for stories when I do have the space. Until then – I am very intentional about what I work on at any time. I spend a lot of time daydreaming and outlining and creating voice notes. I recently had a deadline on a pilot I’m writing and was able to write 10 pages in the few hours I had, which I was really able to do because I had so many clear notes of scenes I could scribble during lunches and voice notes of ideas I could get out while my kids played outside.

Collaboration is another helpful tool in this phase of my life. I have gotten so much from co-writing and writing groups and chats with friends about story – just being able to talk about stuff makes the time I actually have to write much more productive because the story has been in motion in some form already.

Lesley is the place where I found my voice and became courageous enough to use it. Through the focused and forced act of writing required in an MFA program, I had to write and get all the crap out. Everything I was imitating or thought I was supposed to do was lovingly criticized to oblivion and all that was left was me. And now I love giving and receiving notes because I can connect with how they point us deeper into ourselves. I loved my experience at Lesley so much and all the incredible people I met.

I’m just coming off of a big week of pitches, and I think the most helpful thing I learned from the experience is that: people care about your story when you bring them into your vision and why you have to write it. How is this story personal? What inspired you? Why are you the best person to tell this story? What is your unique take/contribution? Why now? Pitching can be such a huge part of getting our stories made and it’s another opportunity to tell a story – a quick and impactful story about what we’re already passionate about.

Besides working on rewriting everything I wrote at Lesley, I have been working on a fictional dramatic podcast with my dear friend and co-writer/director, Courtney Hope Thérond. It’s about a family reeling from the loss of their 5-year-old son and follows how they come together and fall apart over the course of a year. It has a dream cast of some of my favorite Latina actresses. All of my fingers are crossed and prayers up for a Hispanic Heritage Month Miracle that we can find a producing partner to bring this show to an audience in 2022.

I’m also working on a Writing with Spirit Oracle Deck for all the brujitx writers out there that can be a tool to help focus the writing process or provide guidance for our personal lives and center ourselves as the Hero of our Journey. Details will be announced on Instagram (@rhiannonciaravaughn) or my website next month.

Catch a glimpse of Rhiannon‘s work in this reading of her 10-minute play, “A Lovely Day Outside”: