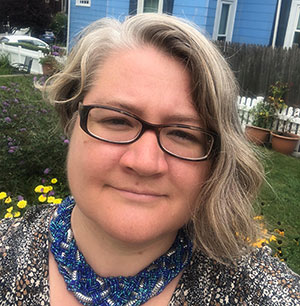 After finding her way back to writing after some time in web development, Frances Donovan went on to self-publish her own chapbook, which became a finalist in the 31st annual Lambda Literary Awards. Her next manuscript will be published by Lily Review Poetry Books in January 2023. Frances talks about the benefits of self-publishing, her new manuscript, and the importance of expecting rejection.

FRANCES DONOVAN’s chapbook Mad Quick Hand of the Seashore was named a finalist in the 31st Lambda Literary Awards. Publication credits include The Rumpus, Snapdragon, and SWWIM. She holds an MFA in poetry from Lesley University, is a certified Poet Educator with Mass Poetry, and has appeared as a featured reader at numerous venues. She once drove a bulldozer in an LGBTQ+ Pride parade while wearing a bustier. You can find her climbing hills in Boston and online at www.gardenofwords.com.

Check Frances out at our Bookstore!

Were you writing poetry before you applied to the Lesley MFA program and if so, what inspired you to start?

I began writing poetry at a very young age, around age eight or so. I composed my first poem hanging upside-down off a tire swing. Some of my earliest memories are of being attracted to repetition of words and sounds: ‘Madeline, who only said “pooh-pooh” to the lion in the zoo,’ and the parallel sentence structure in the Our Father. American society loves to encourage creative expression in our children and young people, and I was no exception. I won some prizes as a young poet and headed off to Vassar with a scholarship, sure I was going to win the Nobel by the age of 30. Someone once asked T.S. Eliot if colleges were stifling budding writers, and he said, “Not nearly enough of them.” I was one of those. It didn’t help that I came down with a debilitating chronic illness just before college. I continued to write, but I fell into web development in the mid 90s and found that I enjoyed being able to pay my rent and such. I taught myself HTML and all the rest so that I could self-publish online, which I did for many years. In my 30s I got more serious about my poetry and eventually settled on earning my MFA. It was a big decision, and it took me years and the encouragement of my spouse to finally take the plunge. You don’t need an MFA to become a Successful Poet (TM), but it helps, especially if you’re not a performance poet.

One work that you’ve self-published is your chapbook, Mad Quick Hand of the Seashore: Love Poems, which was named a finalist in the 31st annual Lambda Literary Awards. What drew you to self-publishing over submitting to publishers? What benefits do you find it has?

Some of the poems in my first chapbook date back 20 years or more. Some of them used to live on my personal website, www.gardenofwords.com. The definition of “previously published” has changed since I first put them up, so that was part of the reason why I didn’t seek out a traditional publisher for them. But also, they’d become what Ezra Pound referred to as “stale cream puffs.” The paint was dry on them, but they no longer really represented the poet that I’d become. I wanted to get them out into the world (and in print) so I could get on with publishing better stuff.

There are pros and cons to self-publishing versus finding a publisher. It depends on how you define success. Which is more important: making a profit or validation by poets or presses or journals you admire? How good do you want your book to be? You can self-publish on a shoestring these days, but that’s been true for decades (think ‘zines). If you want a quality book that’s well designed and doesn’t contain typos, and one where your poems are really the best they can be, it helps to hire someone to help you. But it’s not necessary.

What finally got me to pull the trigger and publish MAD QUICK HAND OF THE SEASHORE was an interdisciplinary course on the art of the chapbook I designed with the help of Lori Desrosiers. After I completed the course, I finally settled on a “good enough” design and publishing platform. Because I published the book myself, I was able to submit it to the Lambda Literary Awards, where it was named as a finalist for bisexual poetry. So in my case, it worked out pretty well.

I’m glad that my first full-length is coming out from an existing press, though. Eileen Cleary, another Lesley MFA alum, founded Lily Poetry Review, and a few years ago she started publishing chapbooks and full-length manuscripts. Running a press is a lot of work, and Eileen has an incredible work ethic. She is also very good at gathering people together. Martha McCollough designs the books, and she does such a better job than I’d be able to do on my own. Christine Jones is my editor, and I’m so grateful for the time and attention she gives to my work. When it comes out in 2023, I know it will be a better book than it would have been if I’d decided to keep self-publishing. And those are just two members of the Lily family. There’s a host of people who work on the review, and Lily poets have formed a coop to help one another market their books as well.

It’s wonderful to be part of a literary community like the one you’ve found at Lily Poetry Review (they’ve published other Lesley alums as well, including most recently Clarissa Adkins and Robbie Gamble). How do you find ways to stay engaged in the literary world?

There are many different ways to stay involved. It really depends on your temperament. Even before COVID, I was a bit of a recluse, so I haven’t been a regular at poetry readings, but there are a huge number of them in Boston and that’s a great way to make literary connections. I organized two small groups that meet every couple of weeks on Zoom. One of them is an accountability group where we each share what we’ve done to further our writing practice, whether that’s submitting to journals, revising, or working on manuscripts. Then we set goals for ourselves for the coming two weeks, and we end with a free-write. It’s been gratifying to see some poems that had their origins in free-writes get published.

I also belong to a very small workshop that’s been meeting in one form or another since before I started at Lesley. A woman I know from a Facebook group started it, and all three of the original members have gone on to earn their MFAs. The other three poets in the group now are all women whose work I really admire. I feel privileged to be a part of that group.

There’s also your work as a certified Poet Educator with Mass Poetry. What sort of work does that involve and how did you come into that position?

Another interdisciplinary course I took at Lesley was the first ever Mass Poetry poet educator certification course. Regie Gibson, a very well-known poet, taught the course, and it culminated in a Student Day of Poetry in South Boston. Most of the other people taking the course have gone on to residencies in different Boston-area schools, but my schedule hasn’t allowed for that. I found the work I did in that class really valuable though. I teach adults at a local art studio in Roslindale, and the lesson and syllabus planning I did in that class has come in really handy.

How has your writing life been since you graduated from the Lesley MFA program? Have you developed any helpful writing routines or do you just write when you have the time/inspiration?

It’s been up and down. I live with a chronic illness, so I have good days and bad days — and sometimes good months and bad months. There have been times when I haven’t written a thing, but I’ve always stayed connected to a writing community. I’ve had a variety of writing practices over the years. For years I did morning pages. Journaling is a helpful tool for self-knowledge but for me it doesn’t produce poetry. I do free-writes now with a few groups, and the workshop forces me to shape them into poems.

Right now I’m working with an editor on revisions for my debut full-length manuscript, due out from Lily Poetry Review Books in January 2023. It isn’t the same as a generative writing practice but does require creative energy.

That’s wonderful news about your upcoming manuscript! Can you tell us a bit about what your debut will entail?

Thank you! I’m so excited that Eileen Cleary, Lily’s publisher (and another Lesley grad) selected it. There are many different presses out there, and Lily really works with poets to make the books the best they can be.

It’s always difficult to describe one’s own work, but I’ve had to do some of that while sending it out, and I’ve gotten feedback from some excellent poets, including Lesley professor Kevin Prufer. It uses a variety of masks to evoke the fractured self. Like most debut collections, it draws a lot on my personal experiences, including a difficult childhood. A lot of the poems in it are from a series I did exploring the archetype of the princess — with all its knottiness and contradictions. I definitely pushed the envelope; there’s a poem called “Dirt Princess,” and another called “Fox News Princess.” There are three major characters braided through the book: Snow White, Rapunzel, and a character called “little princess” who represents my youngest, most vulnerable self. My hope is that it will take the reader on a journey that mirrors Inanna’s descent into the underworld. That’s an ancient Sumerian tale where Inanna passes through seven gates, each time shedding another part of her royal regalia, until she finally meets her shadow self — the underworld goddess Ereshkigal, who “speaks the world of blame” and hangs her on the wall like a piece of meat. Ultimately, it’s a resurrection story, and when Inanna returns to the world above, she’s stronger and wiser.

It sounds like a true epic. And you’re in good hands with Lily Poetry Review! Is there anything else you’d like to talk about?

Here’s what I wish someone had told me when I’d just graduated from college: expect rejection. It’s just a numbers game; once a journal gets a reputation for publishing quality work, they’re likely to be slammed with submissions. And if you’re not willing to expose yourself to that kind of rejection, that’s okay too.

In my experience, getting that outside recognition feels good for a minute, but the real pleasure in a writing life comes from the flow state of creation and the way that writing connects you with others: other writers sure, but you never know who will read your work. For me, a connection with a small, trusted constellation of poets I admire is essential. When I couldn’t find a community that fit, I created my own. And you can too.

Listen to Frances read two of her poems: “Rapunzel Missing the Tower” and “How Do You Keep Your Tempest?”