Starting us off for Women’s History Month is Writing for Stage and Screen alum Brianne Christopher! Brianne has worked in several different genres since graduating from the program, and talks here about writing horror-themed work, what she enjoyed most about Lesley, and how to combat creativity fatigue.

Brianne Christopher grew up around the U.S., specifically New Jersey, California, and Massachusetts. Her works include screenplays ABORT! and Two Princes, television pilots Cult of Hal and The Reset, and stage play The Dinner List. Her ten-minute play Big Brother was a KCACTF Regional Finalist in 2017. She writes mostly comedy and horror, and finds inspiration where the two intersect. She recently completed the first draft of a science fiction novel. 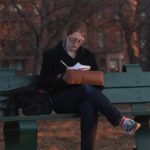 You’ve written both screenplays and stage plays–is there one you prefer over the other or do you find that each are uniquely suited to different story ideas?

I have always tended to view my life in a cinematic way. I had my first idea for a screenplay when I was 13: a comedy about a man who joins the Big Brother program and gets paired with an elderly man by mistake. The ideas kept flowing, but it wasn’t until I was 18 that I started writing the horror screenplay that I today view as my life’s work, ABORT!, about a demonic teen pregnancy. I came to Lesley hellbent and dead set on writing screenplays only, and I was hoping our lovely faculty would make an exception for me. 😉 It wasn’t until I wrote my full-length stage play, The Dinner List, about a cannibal chef, that it really clicked. During my staged reading (part of the S&S program), I got to hear the actors and director on stage, reading my words out loud for the first time and laughing along to the dark comedy that I wrote. It was one of the most rewarding experiences of my life, and I fell in love with writing for theater! That first idea I had for a screenplay when I was a kid? It later turned into a ten-minute play called Big Brother that ended up placing in the Kennedy Center National Playwriting Program a few years ago. I still prefer my first love of writing for the screen, though.

Where do you tend to draw your inspiration from in your writing?

In your bio you mention you write mostly comedy and horror–what have been some of your biggest inspirations in those genres?

I actually taught my senior seminar on the intersection between horror and comedy, and I think there is a lot of important overlap between the two. For horror, I have a soft spot for satanic and demonic themes, because that is what inspired ABORT! Films like Rosemary’s Baby, The Exorcist, and The Omen really had an impact on me as a kid, as well as reading Stephen King books in my grandparents’ house, in the middle of the woods, in Maine (Yikes!). I also have a love of horror “B-movies” like Troma’s The Toxic Avenger and Class of Nuke ‘Em High. In terms of comedy, I’ve always been inspired by more low-brow, alternative comedy and sketch shows. I think you have to be really smart to make something really “dumb”. I consider Tim Robinson a comedic genius and I love I Think You Should Leave and Detroiters. I’m also comedically inspired by the only person I consider funnier than me, a comedian from Boston named Dicky Stock.

What is something that gets in the way of your writing and how do you overcome it?

For me, it’s self-doubt. I’ll write 10 or so pages, be really jazzed about what I got down on paper, and then come back to read the pages later and think “wow, this sucks!” After that happens a few times, you start to get less and less jazzed every time you write those pages. But there’s always that once-in-a-blue-moon moment when you’re like “Damn, I wrote that? That shit’s good.”

What did you find most valuable about the Lesley MFA experience?

The people you meet, both faculty and fellow students. Up until I started a new grad program, I was hosting a weekly writing group for myself and another S&S alum, and I still keep in touch with many others. I interned for another S&S alum as a postproduction intern on her documentary and got to talk about it at the IFF Boston premiere, which was super cool! Another really valuable aspect of the program for me that I think can be unsung is the faculty speeches at graduation. There was a super inspirational speech given each semester I was there, and I’m sure that has continued. Of course, I’m biased toward Jami Brandli’s speech, and I’ll never forget the phrase she used, which stays with me to this day: “I get to write.”

You recently completed the first draft of a science fiction novel–what was that process like and what inspired you to tackle a prose project?

I remember watching a TedTalk awhile ago on creativity, and the speaker suggested that when you feel creatively drained or frustrated, try changing form or medium. I was feeling kind of burnt out with the TV pilot I was working on, so when November of last year rolled around, I tried my hand at NaNoWriMo with this idea I had in my head for a while about human clones. The challenge for me was partly to get my idea on paper and partly to see if I could actually accomplish a goal of 50,000 words in 30 days. It was invigorating, pull-my-hair-out hard, and unforgettably fun.

Are there any projects that you’re currently working on?

One bigger project is that I am currently studying to become a therapist, and I hope to bring my love of writing into my new career by offering therapeutic writing and narrative therapy to my clients. I’ve also been writing some song lyrics and grouping them into themes that might someday, maybe, eventually become songs. With that, I’m just informally jotting things down in the Notes app on my phone. But hey, writing is writing, right?

Listen to Brianne read an excerpt from her fiction piece “Timeline of The Far Future”: